An Inspiration to Serve 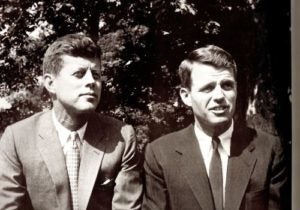 As the second of nine children in an Irish Catholic family, notions of fairness and justice were the subjects of near daily debate during my childhood. With so many siblings, life seemed like rolling team events, as one sport's season slipped into the next. From this beginning and a six-year stint in the U.S. Marine Corps Reserve, I was naturally attracted to work as a courtroom lawyer; it combines my fundamental sense of fairness and inspiration to serve with a passion for competition—particularly in the service of others.

Having come of age when John F. Kennedy ran and became President, I was deeply affected not only by his tragic death but by the inspiration he provided to serve my country. I suspect there are many baby boomers that were similarly affected. Who could forget: "My fellow Americans, ask not what your country can do for you, ask what you can do for your country." The loss of Robert F. Kennedy had a similar impact.

So, it was not too surprising that despite offers to practice law at Am Law 100 firms in a number of major cities after graduating from law school, I was drawn to Washington, D.C. My original plan was to practice law for a few years at Cadwalader, Wickersham & Taft in Washington and then return to Dayton to join a well-established business law firm where I had clerked while in school and with which I had an outstanding offer.

The pull to public service, however, was too strong, and after almost six years at Cadwalader, I spent the next twenty-five years as a lead trial and appellate counsel at the Department of Justice, the Federal Deposit Insurance Corporation, and a short tour at the Office of the Comptroller of the Currency. I was fortunate to serve as lead counsel in high-profile cases throughout both the savings & loan crisis of the late 1980s and early 1990s and the Great Recession that began in 2007 and became a full blown panic in September 2008.

Even though my years of government service have ended, I still love Washington and hope to bring to the service of my clients at Madden Law the same inspiration for fairness and justice that JFK and RFK instilled in me many years ago.